The mountains of the Rethymno prefecture are exceptionally rich in caves, there being some 850 in all. Many of these caves are of particular interest archaeologically, historically, folkloric or even just of natural beauty. The most famous caves of the prefecture are those of Gerani, of Simonelli, west of the town of Rethymno, of Aghios Antonios near the village of Patsos in the district of Amari, of Melidoni, as well as the cave of Ideon Andron, of Moungri Sison, of Sfendoni near the village of Zoniana and others.

It is situated on the Nida plateau of Mount Psiloritis, 24 km from the village of Anoghia and 78 km from the town of Rethymno. Initially its extraordinary large entrance impresses visitors to the Ideon Andron, which is at a height of 1538 m. The cave itself is of particularly large dimensions, with a vast central hall and a gallery of 22 m in length. The cave, in which Zeus was raised according to mythology, represented an important place of worship in both the Minoan and the Roman period. The excavation works that were carried out in the interior of the cave revealed an abundance of important finds such as ceramics, gold jewellery, metal objects and of course the famous bronze shields. Since research is still in progress the cave cannot be visited.

Excavation works, which continue to be effected in the cave of Melidoni, have proved that the cave was used as a central place of worship from the early Neolithic age up until the Roman period. An inscription gives evidence of the fact that Hermes was worshipped in this cave. It also played an important role during modern times, more precisely during the Turkish occupation. In January 1834, the Turks besieged the cave, where 370 inhabitants of the village of Melidoni had found shelter, set it on fire and suffocated everybody in it. Their bones are preserved in the memorial sarcophagus situated in the first hall. The cave is open to visitors. 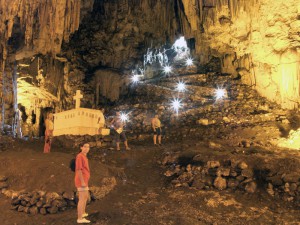 The cave of Melidoni

This cave displays magnificent stalagmites and boasts 6 halls. Apart from three human skeletons archaeological research has brought to light a variety of bone and stone tools dating back to the Neolithic period. Furthermore important material of palaeontological interest was found, probably relics of more than 100 endemic deer, which must have died towards the end of the Pleistocene period. The human skeletons belonged to people who were probably trapped in the cave, perhaps due to an earthquake.

The cave of Sfendoni is near the village of Zoniana in the district of Mylopotamos (47 km from Rethymno in the direction of Perama – Axos) displays 14 halls, richly ornamented with stalactites and stalagmites. It is 550 m long and covers a total of 3,330 sq.m. During recent years archaeological research has uncovered installations dating back to the Neolithic period in the interior of the cave.

Aghios Antonios Cave:
The Aghios Antonios cave is near the village of Patsos also represents a place of dedication as has been proved by archaeological research. It was used as an important centre of worship from the Late Minoan up until the Roman period. An inscription that was found in the cave testifies that Hermes Kraneos was worshipped here. The church in the interior of the cave is dedicated to Aghios Antonios, the patron of the children. The cave is open to visitors.

The music of Crete is a traditional form of Greek folk music, also called Kritika. Although, the Lyra is the

The mountains of the Rethymno prefecture are exceptionally rich in caves, there being some 850 in all. Many of these

Gorges of extraordinary beauty traverse the mountains and mountain ranges of the prefecture: the ravine of Kourtaliotis which is 3

The European path E4 beginning at Gibraltar crosses Spain, France Switzerland, Germany Austria, Hungary and Bulgaria and ends up in